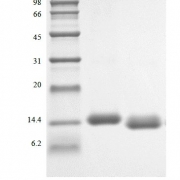 Granulocyte-Macrophage Colony Stimulating Factor (GM-CSF) is secreted by a number of different cell types (including activated T cells, B cells, macrophages, mast cells, endothelial cells and fibroblasts) in response to cytokine or immune and inflammatory stimulation. It was initially characterized as a growth factor that can support the in vitro colony formation of granulocyte-macrophage progenitors and has functions of stimulates the growth and differentiation of hematopoietic precursor cells from various lineages. GM-CSF has also been reported to have a functional role on non-hematopoietic cells and can induce human endothelial cells to migrate and proliferate. Additionally, it can stimulate the proliferation of a number of tumor cell lines, including osteogenic sarcoma, carcinoma and adenocarcinoma cell lines. Human GM-CSF shares 54 % sequences identity with mouse GM-CSF, but has no biological effects across species. GM-CSF is used as a medication to stimulate the production of white blood cells following chemotherapy and has also recently been evaluated in clinical trials for its potential as a vaccine adjuvant in HIV-infected patients.

Fully biologically active when compared to standard. The ED50 as determined by a cell proliferation assay using human TF-1 cells is less than 0.1 ng/ml, corresponding to a specific activity of > 1.0 × 107 IU/mg.

Lyophilized from a 0.2 um filtered concentrated solution in PBS, pH 7.4.

Less than 1.0 EU/ug of rHuGM-CSF as determined by LAL method. 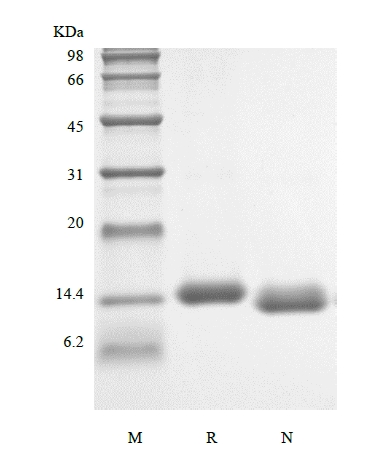