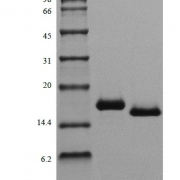 Flt3-ligand (FL) is a recently identified hematopoietic cytokine whose activities are mediated by binding to the transmembrane glycoprotein Flt3. Flt3 was first discovered as a member of the class III subfamily of receptor tyrosine kinases (RTK) whose expression among hematopoietic cells was found to be restricted to highly enriched stem/progenitor cell populations. Additionally, class III RTKs include the receptors from SCF, M-CSF and PDGF. Not surprisingly, Flt3-ligand is also structurally related to M-CSF and SCF. All three cytokines have been shown to exist both as type I transmembrane proteins and as soluble proteins. The predominant human FL isoform is a transmembrane protein that can undergo proteolytic cleavage to generate a soluble form of the protein. An alternatively-spliced FL mRNA, encoding a soluble form of the human FL, has also been identified. FL is widely expressed in various human and mouse tissues. At the amino acid sequence level, human and mouse FL are approximately 72 % identical and the two proteins exhibit cross-species activity. FL has been shown to synergize with a wide variety of hematopoietic cytokines to stimulate the growth and differentiation of early hematopoietic progenitors.

Fully biologically active when compared to standard. The ED50 as determined by a cell proliferation assay using human AML5 cells is less than 1.0 ng/ml, corresponding to a specific activity of > 1.0 × 106 IU/mg.

Lyophilized from a 0.2 um filtered concentrated solution in PBS, pH 7.0.

Less than 1 EU/ug of rHuFlt3-Ligand as determined by LAL method. 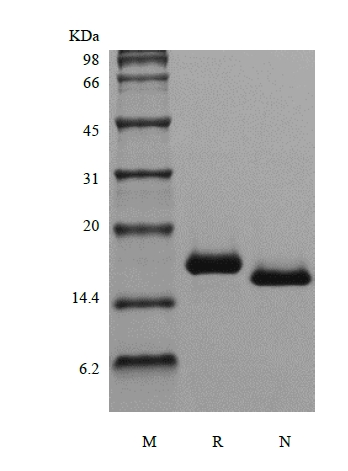